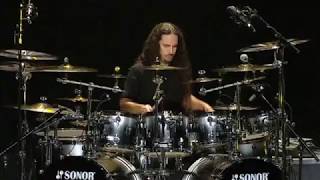 This is a clip from the Modern Drummer Festival 2008 with Derek Roddy. The Festival features performances and interviews by Todd Sucherman, Simon Phillips, Thomas Pridgen, Bill Stewart, Dafnis Prieto, Ndugu Chancler, Will Calhoun, Billy Ward and Carmine Appice and Slam.

In addition to a blazing performance, Derek is interviewed for an instructional segment by Todd Sucherman.

Included in other segments are inspiring conversations with each drummer as well as unprecedented drummer-to-drummer interviews, such as Simon Phillips with Gavin Harrison, Ndugu Chancler with Will Calhoun.

The full Festival is available on DVD and Digital Download and includes a 28 page printable eBook at:

Advanced Funk Studies, by Rick Latham, is a classic, best-selling drum method book. While focused on the concepts of funk and fusion music, the...

Puzzles, Rhymes, and Riddles, by Bruce Becker, was written to give some insights and concepts to learn to hear and play odd time patterns and...