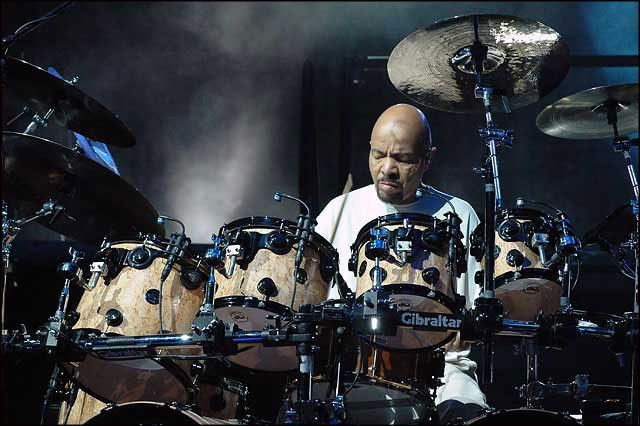 Chester Thompson is a renowned percussionist, highly regarded for his ability to move seamlessly between genres. Thompson’s known best for his work with Weather Report, Frank Zappa, Genesis and Phil Collins. He’s shared the stage and/or studio with notable legends such as Freddie Hubbard, Ahmad Jamal, Wayne Shorter, Rodney Franklin, Kirk Whalum, Taj Mahal & Keb’ Mo’, Michael McDonald, Santana, and many others. In 2015, The Chester Thompson Trio released their second album, Simpler Times, which rose to #4 on the JazzWeek Charts. Their first CD, Approved (2013), made a memorable first impression rising to #6 on the JazzWeek Charts. It exemplifies Thompson’s creative direction as bandleader and prompted a successful European tour. The trio formed after being hired as the rhythm section for the International Trombone Festival. They performed every Monday for a year at the Commodore Lounge near Vanderbilt in preparation for their first album. When Chester is not busy with live performances, studio recordings, clinics, writing, he teaches percussion lessons in the Greater Nashville Area. For 20 years, 1998-2018, Thompson taught applied drum lessons at the esteemed Belmont University in Nashville, TN. He is a well regarded clinician and can be found teaching classes at the Nashville Jazz Workshop. Thompson was honoured in 2008 with the Sabian Lifetime Achievement Award at the 32nd Percussive Arts Society international Convention (PASIC). This award recognizes the contributions of the most highly regarded leaders in percussion education. Born and raised in Baltimore, Chester started playing in local nightclubs at age 13. Between tours Thompson’s accomplishments brought him to live in cities including Los Angeles, London and his current home, Nashville. Chester Thompson currently endorses DW Drums, Sabian Cymbals, Regal Tip Sticks, Remo Drum Heads, Beyerdynamic Microphones and Meinl Percussion.