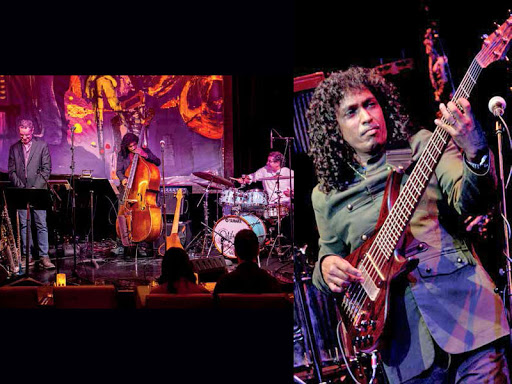 Since arriving in California in 1988 from his native land of Sri Lanka, Hussain has become a first call bass player in Los Angeles. His feel, versatility and joyful attitude has kept his phone ringing for over thirty years. His presence is a joy to behold on the bandstand and in the studio, raising the level of musicality and inspiring both the audience and the musicians that he plays with.
Born and raised in Colombo, Sri Lanka, Hussain grew up surrounded by the richly varied traditional music of his country, but was also drawn to Pop, Jazz and R&B that he heard on the radio. He started singing in school choirs at 10, took up piano and accordion at age 12, and at 17 started playing electric bass.

After living in Europe for 6 years he moved to Los Angeles to study music at the Musicians Institute, where he graduated with the school’s highest honors. Armed with his bass, his passion and dedication Hussain’s stellar reputation has lead him to travel the world many times over, playing music with some of the most beloved artists of our generation.