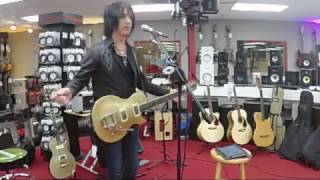 Steve Fister, artist with Godin Guitars, joined us for a live, in-store clinic and performance at the National City location of Pitbull Audio. Subscribe to our channel for more coverage of clinics and events!

Steve Fister, guitarist, singer, and songwriter. He has performed and recorded with many artists such as: Steppenwolf, Bon Jovi, King Kobra, Quiet Riot, Joe Satriani, to name a few. His songs have also been featured in the Rock Band video game, as well as on HBO, ABC, NBC, Saturday Night Live, Showtime, “E,” VH1, MTV, Fox Sports, the Howard Stern show and the History Channel.

PBA Presents: George Lynch ESP Guitar Clinic The great George Lynch from Dokken and Lynch Mob came to hang out with us on January 9th for ESP Guitars...